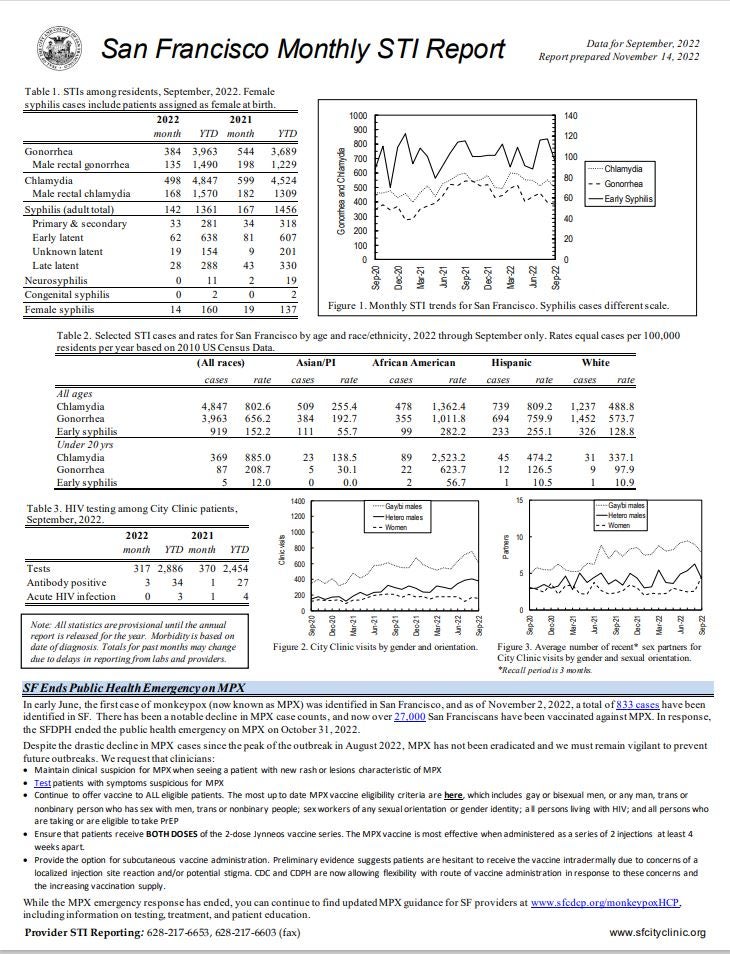 The San Francisco Monthly STI Report (sfdph.org) for September is now available for viewing here or click on the image.

In early June, the first case of monkeypox (now known as MPX) was identified in San Francisco, and as of November 2, 2022, a total of 833 cases have been identified in SF. There has been a notable decline in MPX case counts, and now over 27,000 San Franciscans have been vaccinated against MPX. In response, the SFDPH ended the public health emergency on MPX on October 31, 2022.

Despite the drastic decline in MPX cases since the peak of the outbreak in August 2022, MPX has not been eradicated and we must remain vigilant to prevent future outbreaks. We request that clinicians:

While the MPX emergency response has ended, you can continue to find updated MPX guidance for SF providers at www.sfcdcp.org/monkeypoxHCP, including information on testing, treatment, and patient education.

What Our Patients Say...

“I just wanted to say thank you guys for all that you do and the way that you do it :) It means a lot that you all provide a legit friendly, supportive, reliable, non-judgmental environment for us to be able to get the treatment that we need. The fact that we are able to get the standard of medical care that normal people receive means the world to me. Everyone else have no clue most what it’s like to dread going to the doc because of the way that you will be treated or fear of deliberate malpractice and/or incomplete care because of prejudice. So thank you for being awesome and extremely valuable and irreplaceable. In short, you guys are THE SHIT! =) ❤ Pardon my French. With complete gratitude & admiration, you guys R the best, thank you with much luv! ❤”

Your donation makes a difference

Your tax-deductible contribution will help us to continue offering low/no-cost care.